Dream of Hawaii and you might immediately think of stretches of golden sand studded with palm trees.

While this may be an accurate vision of the islands’ sublime shores, few realize that Hawaii is also home to a rainbow of vibrant-hued beaches. Plan to be dazzled by these surreal spots:

Papakolea Beach—a cove tucked into pastureland on the Big Island’s southernmost tip—is world-renowned for a reason: it’s one of four beaches on the planet that possesses green sand, sharing the distinction only with Norway, Guam and the Galapagos Islands. Located in the Ka’u District, this bizarre example of one of nature’s niftiest twists is celebrated for sand that, upon close inspection, better resembles crushed, pale emeralds. Its odd green hue is due to the presence of olivine—a magnesium-rich mineral, frequently found in lava, that forms when magma cools. Pu’u Mahana, a partially collapsed, slowly eroding cinder cone, frames this exquisite spot and feeds the beach’s color through the accumulation of the crystal—which is durable enough to withstand the swells that strip the beach of its usual sand. The hike down the cinder cone to see its splendor renders it all the rarer, but act fast (at least in geological terms): the supply of olivine is finite, and with time, the beach will become regular old beige.

Maui’s fiery history is best represented at Hana’s Kaihalulu Bay—a stretch of scarlet-inflamed sand within echoing distance of Queen Ka’ahumanu’s birthplace. Literally meaning “roaring sea,” the iron-rich beach receives its ruby-orange hue from Ka’uiki Head, a cinder cone smack dab on the water that, much like Papakolea’s Pu’u Mahana, is perpetually eroding—a process that casts the beach in an inimitable red ash. Framed by gem-green ironwoods and toothpaste-blue water, this bay is nothing if not a study in contrast. Consider it part of Pele’s rebellion during the invasion of the Hawaiian Islands: this “pocket” beach was the site of some of Maui’s fiercest battles.

We don’t suggest visiting this beach because of the treacherous trail.  Rock slides along the cliffs have killed beach goers in the past.  Enjoy the photos and move on.

Molokai might receive most of its acclaim for housing one of the largest leprosy colonies during the late 1800s. And justly so: Father Damien was a modern hero of unparalleled proportions. But Molokai is also home to Papohaku Beach (not to be confused with Maui’s beach of the same name), a ten-and-a-half-acre park on the remote west end of Hawaii’s friendliest isle. While technically cloaked in tan sand, certain times of day turn this bay a blinding, poppy-orange gold. All the better to show off those tan lines: at three miles long and largely deserted, Papohaku is an au naturel sunbather’s Eden. Given that sand is primarily comprised of weathered coral, quartz, and volcanic ash, it ought to come as no surprise that Hawaii—a bit of an infant in the grander scope of Earth’s history—brims with black sand beaches that reflect its newly-made lava landscapes. Haunting and uncanny, those that are tobacco-shaded are the result of torrents of magma hitting the ocean and bursting into black basalt crystals when the lava cools. And it’s not just the shade of the sand that’s impacted: coarser than its blonde counterparts, black sand is gritty stuff—quite fitting for its oh-so-noir aura.

Maui’s One’uli Beach (or Naupaka) adds to the mystique. Located at the base of Pu’u O’Lai in Makena, this onyx cove on the north side of Little Beach has saltponds, fields of cacti and kiawe, and million-dollar views of the outer islands. Tricky to find is kind of its point, but prepare to traverse some rough terrain before reaching the park on the south end. Plein air painters, take note: the solitude here, coupled with the views, is basically a recipe for a masterpiece. Also on Maui, Wai’anapanapa State Park has a black sand beach not far from Hana Town called Pa’iloa Beach.  Some areas of the beach have finer sand, but most of it is comprised of small rounded pebbles.   This is a great spot for exploring coastal caves and learning about the legends of Popo’alaea. As the youngest island in the archipelago, the Big Island boasts some of the darkest-sand beaches in Hawaii. Chief among them is Punalu’u Beach on the jagged Kau Coast. Tucked into the villages of Pahala and Na’alehu, this ultra-rocky—and ultra-gorgeous—spot gives sunbathers a treat like no other: shiny black sand created by a’a lava from Hawaii Volcanoes National Park, groves of coconut palms swaying in the breeze, and frequent sightings of the Hawaiian Green Sea Turtle. Espy signs of erosion? Bask in its resilience: this beloved beach has survived three—yes, three—tsunamis.

Plantation cottages and old-growth banyans border Waimea Beach on Hawaii’s oldest island of Kauai. Some argue that the sand here is more dark brown than black, but its flecks of silver give it an extraordinary feel no matter where you stand on semantics. Adding to that is the red water running down from Waimea Canyon and the vintage-y feel of historic Waimea Town. But perhaps nothing tops the beach’s view of Ni’ihau—the seventy-mile Forbidden Island that’s primarily closed to outside visitors. History buffs, listen up: Waimea Beach is where Captain James Cook first landed in Hawaii when he happened upon the chain in 1778.

White sand beaches in Hawaii might be as common as Starbucks in Seattle, but Lanikai deserves a special shout out for its pristine, alabaster beauty. Located in Kailua on the windward side of Oahu, this popular spot lives up to its name of “heavenly sea” (and then some). With a protected lagoon and offshore reefs that keep its waters lullaby-calm, this pretty little haven, lined by high end homes, looks out onto two tiny islands lovingly referred to as “the mokes.” Bone-white sand, aquamarine waters and thriving palms give beachgoers a sense of a déjà vu for a reason: this is one of the most photographed shores in the world. For those who prefer their sand blinding white, look no further than Kauna’oa Beach in front of the Westin Mauna Kea Resort on the Kohala Coast of the Big Island. Crescent-shaped and edged with palms, Kauna’oa appears to be a living, breathing postcard.  A rarity for the Big Island—most beaches have dark sand—Kauna’oa’s immaculate shore stole the heart of Laurance Rockefeller, who, rumor has it, began investing in land nearby after taking a splash in the bay. Who could blame him? This is quintessential Hawaii, as close to perfection as some of us may ever see on Earth—or even in heaven.

DON’T TAKE THE SAND HOME!  A little bit in your scalp or bathing suit is fine, but don’t grab a bag of it as a souvenir.  Bad joo joo.  Watch the Brady Bunch in Hawaii, and you’ll understand. 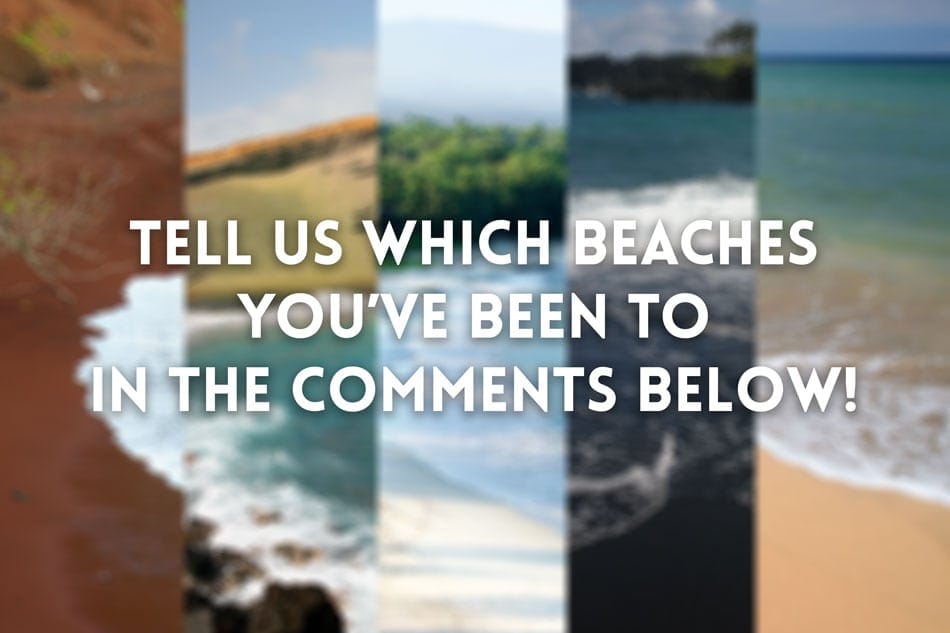